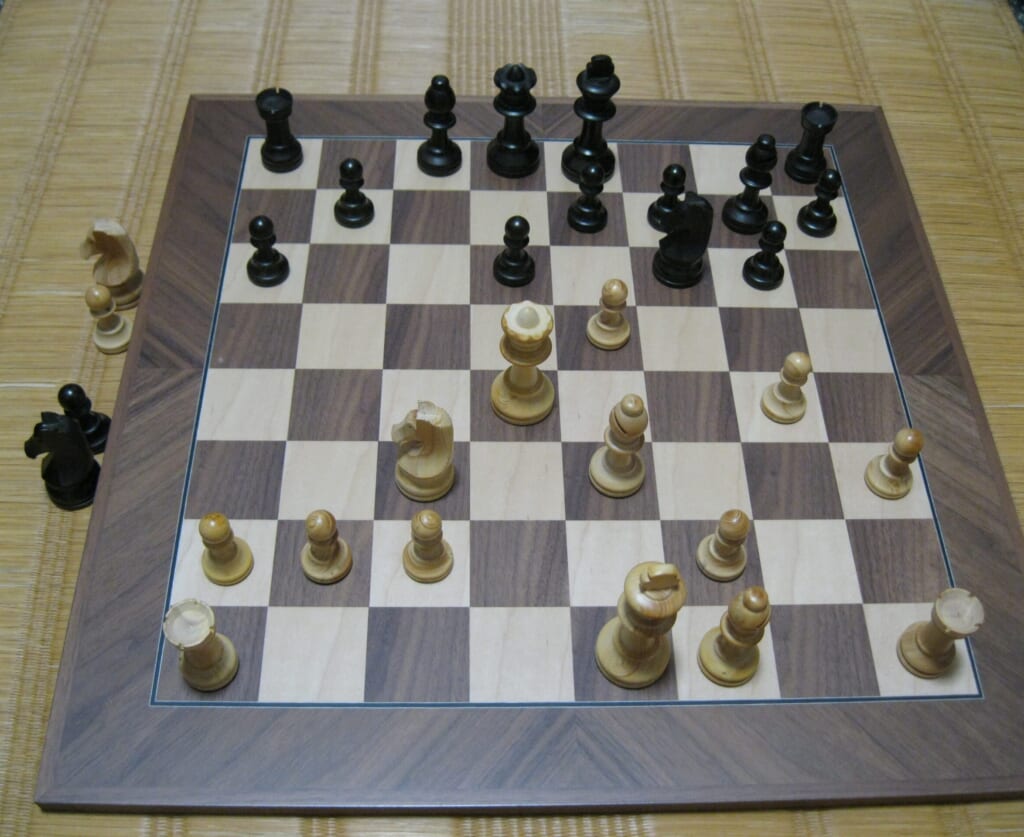 About preparation, is there any difference between Koryu & Chess?

First of all, with no doubt, we must agree that a struggle needs some sorts of preparation, whether or not.

When we open the book “How Life Imitates Chess” written by Garry Kasparov, his and others’ wonderful preparations are here and there, in not only the titled chapter as ‘Preparation’.

And according to his book “The Art of Learning”, Josh Waitzkin also shows his preparations here and there, and besides, the terrible episode about his game of World U12 Chess Championship at Timișoara in Romania that he won but he had wasted his 30 minutes already at starting for losing the way (which means literally, he and his father lost the way to the place!) and a modern chess set was prepared just for him that confused him which was which.

Maybe such a chess fan like me, I mean, read a few chess books, sometimes wrestle some problems and watch some tournaments on YouTube but play little, can very easily forget how hard so many chess players continue to prepare themselves for a win.

So, if players want to win a game on a particular chess tournament, we can easily think that they can prepare as well as possible with their strongest engines and vast databases and, of course, the most reliable seconds and coaches.

But against many players’ prospects, what happens?

Even the World Champion, GM Magnus Carlsen is not an exception.

“Yeah, with general, I mean, just didn’t find it very well. What happened is that.” (*Sorry, I can’t catch his words correctly.)

This is the Magnus’ answer for the question about the opening, “Were you surprised by Bishop d2?” by IM Almira Skripchenko, after his winning with black the game against GM Etienne Bacrot in FIDE World Cup 2021 Quarterfinals – Game 1.

Luckily, we are spectators for such facts here and there on broadcast commentary as follows;

GM Nigel Short praises GM Sam Shankland like this, “A super play by Sam Shankland. Absolutely brilliant. Well deserved victory. Someone asks me, “Did he prepare it from home?” The answer is “No!” I absolutely guarantee. This entire game was not prepared from home.”, for his winning with white against GM Sergey Karjakin at the first game of Quarterfinals – Tie-break in FIDE World Cup 2021.

The second game Nigel relishes and says, “It’s a great match for the spectators, anyway. I mean, there is not a bit of a dull game at all. Absolutely great to watch.”

(Here, this has nothing to do with the game, but I want to answer, “Yes, I’m here! Thank you for your great broadcast commentary.” for Almira and Nigel asking, “Is anybody watching from Japan?” at the moment of Karjakin’s f5 to f6. And after the next move, Nigel concludes, “This is winning for Sergey Karjakin beyond doubt.” Surely, Karjakin wins this game.)

At the moment of the third game when Karjakin with white plays the same opening variation as their first game and then e4 to e5 for his 10th move, clearly 5 times Nigel shouts, “WOW!” before saying “He played e5!”.

Nigel : “He played it instantly.”

Almira : “So, he used 10 minutes probably to talk with his second?”

Nigel : “Yes. I actually witness this, because he did it happen to the VIP room. HE DARTED UP TO, he darted up to the VIP room. Wow! An absolutely standout! A very interesting sacrifice. And he spoke to whoever it was a guy in front of a computer. And I think that must be the preparation. It was literally. I mean, he hired up to the VIP room. Normally when we hire up to the VIP room, it’s for the free glasses of wine that’s run of offer, but what he was doing is checked up on his games.” (*Sorry, if I cannot catch their words exactly.)

Nigel : “But this is very very dangerous initiative. This is clearly prepared.” … “Prepared.”

Nigel : “This is a very interesting thing. It was pretty obvious that he, I mean, there is no way he could prepare this properly. I mean, there were literally minutes. They had the end of the room somewhere a quick discussion, I saw.”

Nigel : “Now it’s such an aggression by Karjakin. It’s great. But HELPED, helped, of course, greatly by the seconds. By the tip. I mean that is invaluable those seconds, you know, I mean what the, when he went up to the stairs, roughly 5 minutes to discuss that. What is 5 minutes, that 300 seconds, that enough for Usain Bolt run 30 100m races. It you can do something in that time.” (*Sorry, if I cannot catch their words exactly.)

Nigel : “Oh, that’s a delicate move. That’s a bit sophisticated in a Blitz game, isn’t it?”

In the fatal 4th game, the secret gets out.

Nigel : “ ‘the Minister of Defense’ here, is just, I think he is saying, “I am prepared to except the very slightly worse position, because I, the honest on you, is to play super accurately in order to exploit your slightly great mobility.”, something like that.” (*Sorry, if I cannot catch his words exactly.)

Then, in the complicated middle game,

Nigel : “This is not easy for Karjakin.” … “The problem always here is ‘what do I play now with black?’ ‘What do I play?’ And you can see the tension, because what you like to do is, you want to have very very clear plans. You know, that you connect secure. A little calculation. You can play a few moves or a clear plan which you connect secure very quickly. Here. He starts to look for a move.” (*Sorry, if I cannot catch his words exactly.)

After Sam’s Queen c3 to c1, not to d2 which Nigel and Almira recommend,

Nigel : “It looks really unpleasant this position.” … “That is a very very serious blunder. … Now he is not going to win this one.”

And at last, Sam resigns.

And one more is, “Once again, even Magnus Carlsen said that Sergey is the best defenser(defender) in the world. So, it’s not like all he appears saying that he is ‘the Minister of Defense’. The World Champion stated that Sergey is the best defender in the world.”, by Almira showing us after Nigel’s comment about Karjakin’s like this, “This is a sort of positions that I keep talking about the big influences on in my life. There are many many fine positional players today. But, you know, but when I was playing a guy like ???. He was absolutely master the positions like this. Very very fine positional sense. And he just controlled everything, didn’t give any, the slightest opportunity for counter play. And put you under pressure.” in the Karjakin’s game with black against GM Jan-Krzysztof Duda(POL) on the broadcast of FIDE World Cup 2021 Final – Game 2. (*Sorry, I cannot catch their words exactly.)

Besides, on the broadcast of 2021 Norway Chess Round 3, IM Jovanka Houska shows us that Karjakin’s nickname is ‘the Minister of Defense’, when she introduces him as the last opponent against the tournament leader GM Richard Rapport(HUN). GM Judit Polgar answers and vividly summarizes the game, so, please enjoy it.

Now it’s time for us to think about what to do in 5 minutes for our preparation, and prepare ourselves to gain the 5 minutes by any chance.

On the other hand, in Koryu, at least in Hontai Yoshin-ryu Jujutsu(本體楊心流柔術), we usually prepare our moves by Kata(形) training.

I mean, we learn not only the right move of Kata(形), but also what to do at the moment when we happen to move different from Kata(形).

First of all, any Kata(形) is created by the great masters of the top level.

So, it goes without saying that first we must learn the right move of Kata(形) by heart.

Then the next step is to polish up our moves more practical.

We often make sure why our moves are dull and useless for some practical moments, and how we can change our moves of Kata(形) to be right as Kata(形) must be.

We sometimes take Kata(形) to pieces and improve them and compose them on the right way.

But if we mistake something in practicing through Kata(形), the first principle is ‘Don’t stop’, ‘Don’t stop, just go on to move to finish the Kata(形) in any case’.

At such a moment, we are allowed to move different from the right Kata(形) in advance.

In fact, the old name ‘Yoshin(楊心)-ryu(流＝an old school)’ is from a half of a lesson by the father of the 1st Soke(宗家=head) which means ‘In any moment or in any situation, keep the resilience like willows in the wind’. And the name of the 1st Soke(宗家) ‘Takagi Oriemon(高木折右衛門)’ is from another half of his lesson which warns ‘Other woods growing tall straightly will be broken someday.’.

So, we learn that the most important thing is ‘Don’t stop’. The worst thing is to stop and start all over again.

We know we sometimes mistake something, sometimes blunder. But a struggle dose never let us stop and do it all over again from the beginning. We do never have the second chance.

Especially when we show our Kata(形) to people at some shrines or temples or somewhere else, we know we are allowed to even create a new move, if we mistake something.

Even if we ourselves don’t mistake anything, the situation cannot be secure for us.

Anyway, if such a moment comes true, we must make a practical decision as soon as possible.

‘Don’t stop. Don’t crack a mistake by any body language. Create a new move and finish it as if this is the right move of Kata(形).’

This is the first principle in Hontai Yoshin-ryu Jujutsu(本體楊心流柔術), and we are allowed to forget what is the right move of Kata(形) at such a moment.

Now, how to move?

Well, if it is not precisely now, thankfully we can prepare ourselves for such a crucial moment.

First of all, Kata(形)is not ‘only move’. Usually there are some moves else, like what we sometimes happen to do, or mistake.

And when we practice Kata(形), we can think about ‘if … ’ in our familiar dojo(道場).

If the opponent’s right hand grips our right wrists, not our left wrists as Kata(形), what can we do?

If the opponent’s left hand, not own right hand as Kata(形), grips our left wrists, what can we do?

If the opponent’s left hand, not own right hand as Kata(形), grips our right wrists, not our left wrists as Kata(形), what can we do?

At least 3 other variations we can learn here adding to the right move of Kata(形).

And they are all right moves, not wrong moves.

These are some preparations in Koryu.

Then, is there any difference about preparation between Koryu & Chess?

If there is a difference, maybe the difference is, for example, is the place where to stand made in soil or sand or gravel or flooring or Tatami(畳) or concrete or something else?

But, you know, isn’t it similar to the touch or height or size or design or something else of the chair that chess players sit for a particular game?

Do you mind it?

If we mind it, maybe we need to prepare ourselves for it.

If we don’t mind it, maybe we need not to prepare ourselves for it.

What do you think?