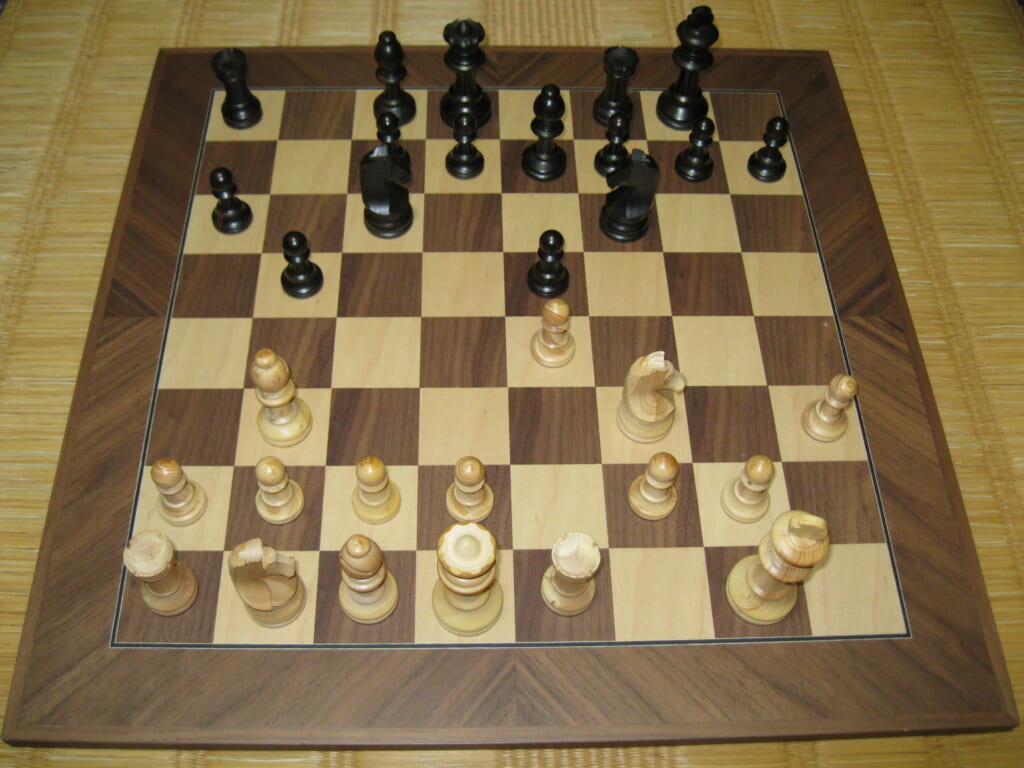 Are there 3 phases, which mean the Opening, the Middle game, and the Endgame, on Koryu as like on Chess, or not?

Before thinking about this question, what is the Opening, the Middle game, and the Endgame on Chess?

Actually, here is just a good example for us.

Yesterday night (because I live in Japan), I was one of 6,000 people who were watching FIDE World Championship Match in Dubai 2021 GAME 1, GM Ian Nepomniachtchi vs the World Champion GM Magnus Carlsen, live on the official broadcast on YouTube.

Only 12 hours later, I’m watching the same official broadcast again now as one of more than 300,000 people.

After about 2 months from 2021 Norway Chess Round 10, the very first move was e4, and what the challenger GM Ian Nepomniachtchi prepared for this game was Ruy Lopez, not Giuoco Piano.

And the defender GM Magnus Carlsen prepared the Morphy Defense for it.

This development is what I learn in the book “The Ideas behind the Chess Openings” written by Reuben Fine (translated by Yu Mizuno in Japanese).

In the book, this Magnus’ Knight f6 as his 4th move has ‘!’ and such words like “Always you have to play powerfully.” continue.

Nepo’s 5th move was Castling, so, according to the Reuben’s book, here both players stood at the crossroads.

But Magnus played not d6 but Castling for his 7th move, which suggested the Marshall Gambit.

Then, what happened? The next move of Nepo was h3.

He is the challenger, and he went on his way with his reason.

And like this, the opening phase ended and the middle game started in this game.

“Play the opening like a book, the middle game like a magician, and the endgame like a machine.”, by showing this famous phrase by Austrian’s Rudolf Spielmann, Garry Kasparov ends his writing titled ‘Phases of the Game’ in his book “How Life Imitates Chess”.

Especially about the opening phase, Emanuel Lasker teaches us in his book “Common Sense in Chess” like this, “First of all we shall mobilize our troops, make them ready for action, try to seize the important lines and points which are yet wholly unoccupied. This proceeding will take, as a rule, no more than six moves, as we shall see later on. If we should neglect to do so, our opponent would avail himself of the opportunity thus given him, would quickly assail some vital point, and ere we could really, the battle would be finished.”

And after some illustrations with his comments, he gives us 4 main points in conclusion and goes ahead like this, “You will see that, according to this plan, the mobilization takes altogether six moves, consumed in the development of two Pawns, the two Knights, and the two Bishops. You may be obliged to spend some of your time in the beginning of a game for the exchange of a pawn or a piece, or it may be necessary to make one or two defensive moves. But the real business of development ought to be accomplished in no more than six separate moves devoted to that purpose.”

And also Kasparov reveals in that book like this, “The purpose of the opening isn’t just to survive the beginning of the game, it’s to set the stage for the type of middle game you want ― or the type of game your opponent doesn’t want. To know what this is requires preparation, study, and opposition research. Which openings does tomorrow’s opponent play? What happened the last few times you played each other? Can you find a new idea in one of these openings that might give you an early advantage? What types of position does he dislike? Which opening choice can lead you into those positions? If you make the right decisions at the outset, you can narrow the field of view and begin unfolding your strategy with care and precision.”

In any case, at the moment when the opening phase ends, the middle game starts.

But before that Spielmann’s phrase in his book, Kasparov warns us, “One phase often changes to another invisibly ― and sometimes changes back with as little notice. What is important is to not make assumptions about a position that depend too much on the characterisitics of a single phase. What works to your benefit in the middle game may hurt you in the endgame. And an acute sense of timing is essential. I’ve seen many examples of one player relaxing into a technical endgame only to find that his opponent is still in the creative middle game.”

Well, after saying “You don’t really want to be playing King and Pawn endgame.” with smile, Nigel answers, “So, who was who it said, “Before the endgame, the gods have placed the middle game.”” for the question by IM Almira Skripchenko, when both are analyzing about the game GM Haik M. Martirosyan (ARM) vs GM M. Amin Tabatabaei (IRI) on the broadcast of FIDE World Cup 2021 Round 5 – Tie-breaks.

(Siegbert Tarrasch said it, which I find in that Kasparov’s book.)

Besides, at the end of the broadcast of 2021 Norway Chess Round 8, after arguing about what happened on that day’s each game, GM Judit Polgar and GM David Howell talk about how both keenly learned many of the tactical endgames that players have to know by heart, for example, “Queen Pawn against Queen, a hundred moves around, those are the toughest. The most difficult, the Queen endgames.” and “Rook endgames”.

And Judit concludes, “I do experience it and I heard it from other players the same what you said, that they learned endgames, and then how their results became much better. But I think it’s not only because you have the knowledge of that pacific endgame, but also you have much bigger self-confidence for the middle game, how to transpose to better Rook endgame, or even as a defender to answering to those endgames.” (*Sorry, if I cannot catch her words correctly.)

“It’s time for the forces to meet and for blood to be spilled. It is a time for creativity, fantasy, and energy.” This description is about the middle game by Kasparov in his same book.

Now for me, ‘the Middle game’ sounds something particular.

Between the Opening and the Endgame, surely there is needed a magician.

For example, ‘Queen-less middle game’ happens as like GM Stuart Conquest mentions, when he and GM Anna Muzychuk turn to watch and find that the game of GM Arjun Erigaisi (IND) vs GM Andrey Esipenko (RUS) is already in the endgame on the broadcast of FIDE Chess.com Grand Swiss 2021 ROUND 1.

Oh yes, in my fantasy(⇒Please come and see my post ‘MY FANTASY’), I easily imagine how  huge the difference is, if both side of Naginata(薙刀) are in the battle or not.

By the way, I believe that now we can imagine generally what is the Opening, the Middle game, and the Endgame on Chess.

Then, are there 3 phases, which mean the Opening, the Middle game, and the Endgame, on Koryu as like on Chess, or not?

For example, on Jujutsu, to be honest, the situation is much more complicated at a glance.

I mean, as a defender, the time we have for a win is only a few seconds.

But maybe we can think about the phases of the opening, the middle game, and the endgame of single common Kata(形) in at most 10 seconds.

Gyaku(逆) means the way to attack some joints of the opponent’s body.

Nage(投) means the way to throw the opponent’s body.

Oku(奥) means the elaborate way to control and seize the opponent’s body.

So, we can think that Uke(受) is White and Tori(捕) is Black.

And also, we can think that 30 standard Kata(形) of our Jujutsu finish as the Black’s win, because Jujutsu is for the self-defense.

So, the first action of standard Kata(形) are 10 patterns in today’s our Hontai Yoshin-ryu Jujutsu(本體楊心流柔術), like the very first move of White on Chess, you know, e4, d4, Nf3,  c4, or g3 like GM Richard Rapport played against Magnus for Armageddon in 2021 Norway Chess Round 3.

On the other hand, all 30 standard Kata(形) finish by winning of Tori(捕), but the winning actions of Tori(捕) are completely different.

Like Queen endgames or Rook endgames, we have to know by heart the winning actions of Tori(捕).

Then a magician is needed in the middle.

Of course, 30 standard Kata(形) have each concrete line.

But each of us have different body, you know, for example, different length of an arm, or a leg.

How many parts of our body we have to use for single standard Kata(形)?

Surely, we have to be a magician in the middle between the first reaction and the last winning action as a defender.

Now I think there are 3 phases, which mean the Opening, the Middle game, and the Endgame, on Koryu as like on Chess.

What do you think?