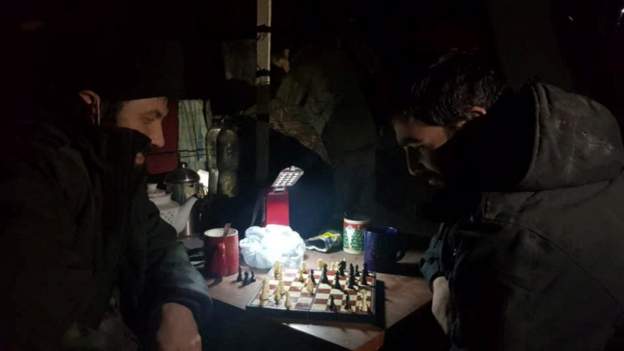 Where is the board?

Caissa is with me.

Her ruthless breast can move.

Without water and food.

Not on the Mars’ tablet.

Not with the mimick troops.

Where is the centre?

Where is the kingside?

Where is the queenside?

Where is the bold King?

Who must be secure?

From danger at all costs?

From whose point of view?

Caissa is with me.

Caissa, her chief to arms.

on the poet’s tongue.

Not yet peaceful slept

*Because I saw the photo noted “Servicemen trapped in the steelworks play chess” and read the article “Wives of Azovstal defenders say food and water running out” on 16 May 2022, on the BBC news, as follows:
“Ukrainian servicemen trapped in the Azovstal steelworks in Mariupol have very little food and drinking water left, the Ukrainian news agency Unian reports, citing the wives of the defenders.
They were speaking at a news conference, a video of which is available on YouTube.
“I spoke with my husband yesterday. He said that the bombing continues unabated, and that they almost never go to the surface,” says Yuliya, the wife of serviceman Arseniy Fedosyuk.
“And when they do go outside, they try to find water and food.
“They are quite pessimistic. They are preparing for the final battle because they do not believe in a diplomatic solution to this issue.
“Most of the time they stay in the bunker because there is constant bombardment. These are three-tonne bombs, incessant air strikes, naval and ground artillery, as well as tanks. They may stay underground for many as three days in a row,” Yuliya said.
According to the soldiers’ wives, there is very little water at Azovstal and their husbands have to drink service water previously used for the plant’s operation.
“We had a call a few hours ago. I was struck by the news that they [Russians] are dropping phosphorous bombs on Azovstal,” says Kateryna, the wife of Azov regiment commander Denys Prokopenko.”

And then, “Zelensky: ‘We need our heroes alive’” on 17 May 2022, as follows:
“The 82th day of Ukraine’s defence was a “difficult” one, President Volodymyr Zelensky says in his nightly Facebook speech, which begins by addressing the latest situation in Mariupol.
“Thanks to the actions of the Ukrainian military – the Armed Forces of Ukraine, intelligence, the negotiating team, the International Committee of the Red Cross and the United Nations, we hope that we will be able to save the lives of our guys,” says Zelensky.
“Among them are the seriously wounded. They are being provided with medical aid.”
“I want to emphasise: Ukraine needs Ukrainian heroes alive,” he continues.
“This is our principle. I think that every adequate person will understand these words.”
Zelensky added that the work “to bring the boys home” continues in Mariupol while other fighting continues to rage in the country’s east.”

Also, “Military chiefs say Mariupol defenders are ‘heroes of our time’” on 17 May 2022, as follows:
“The Ukrainian military’s general staff has said that fighters evacuated from the Azovstal steel plant in Mariupol are “heroes of our time”.
In a message posted to Facebook, army chiefs said the determination of the Ukrainian troops had forced Russia to keep around 20,000 troops entrenched around the city and “hindered the implementation of the plan for the rapid capture of Zaporizhzhia”.
“Forging the enemy’s core forces around Mariupol has given us the opportunity to prepare and create the defensive frontiers on which our troops are still present today and give a decent counterpoint to the aggressor,” the post said.
“We got the critically needed time to build reserves, regroup forces, and get help from partners,” military chiefs went on.
The post added that some fighters remain trapped at the plant and said measures to “rescue defenders who remain in the territory of Azovstal are ongoing”.”

Poems, consisting chiefly of translations from the Asiatick languages. To which are added two essays; I. On the poetry of the eastern nations. II. On the arts, commonly called imitative : Jones, William, Sir, 1746-1794 : Free Download, Borrow, and Streaming : Internet Archive

Please join them! You can also hear my voice, singing this poem.

***Now you can also hear my voice, singing this poem here.

Kurama (author’s singing). «A poet with caissa» — a poem about defenders of Mariupol and Azovstal – YouTube