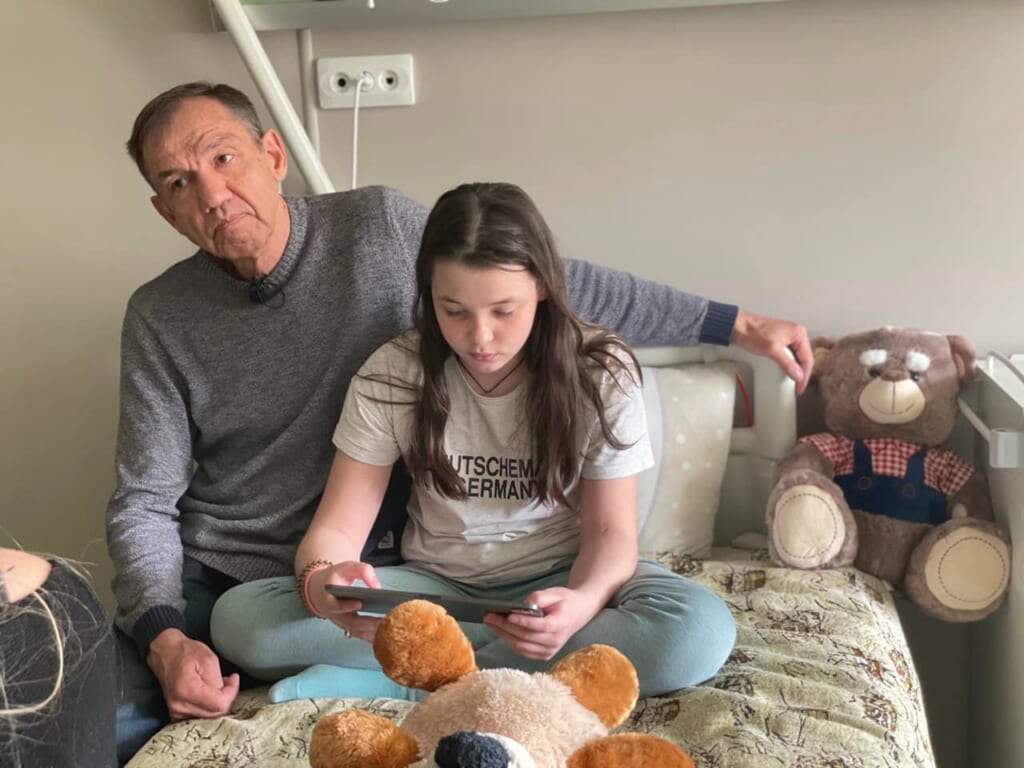 From her native Mariupol almost to ‘Mordor’.

She miraculously returned to Kyiv through ‘Gandalf the Green’.

She smiles and doesn’t let go of her grandpa.

So that no one would kidnap her anymore.

The most precious thing with her is her dad’s mobile phone.

This is the only thing she has left from her dad.

Her mum died two weeks after giving birth to her.

Her dad devoted his life to his two daughters.

In the first days of the war, she stayed with her grandpa.

But her dad soon took her back home.

To quickly spot and extinguish the fire of a bombing.

Her dad was on duty of “watch” with his girlfriend.

On the balcony of the eighth floor.

It was then that ‘orcs’ shot at them.

Her dad died, and his girlfriend survived.

Now she stayed with her dad’s girlfriend.

9 days after her dad’s death.

They decided to flee Mariupol on foot with others.

At one point, a girl touched a trigger from the mine on the ground.

A following dog brunt of the blast and saved people.

The shrapnel hit her in the ear.

Her face was covered in blood.

That sound immediately called soldiers to them.

The soldiers put her and her dad’s girlfriend in a car passing by.

The car was driving to Mangush.

Where they met ‘orcs’.

‘Orcs’ took away her, and later, sent her to Donetsk by ambulance.

First threatened her grandpa that she would be sent to an orphanage in ‘Mordor’.

Thanks to ‘Gandalf the Green’.

Her grandpa could travel and save her.

From Kyiv to Poland by train.

From Poland to Turkey by plane.

From Turkey to Moscow by plane.

From Moscow to Rostov by train.

From Rostov to Donetsk by car.

To be able to hug her was worth it.

*Because I saw the twitter of Ukrainian WGM Anastasiya Karlovych and found that she was Founder of http://chess4peace.com to support the suffered children in the Ohmatdyt hospital in Ukraine.

“The Stories of Ohmatdyt children who have suffered from the war”

“Dear journalists and media people, Ohmatdyt is kindly asking you to share the stories of the children who have suffered from the war. Some of them turned out to be receiving treatment in our hospital, where the specialists are fighting for their health and even life in a courageous way. Unfortunately, it’s not possible to help everyone. We collected 8 stories, which broke our hearts in this post. We are kindly asking you to share them and use the photos and videos for the whole world to see the crimes of Russia against the children in Ukraine.”

And I soon found the story about Kira:

The story of 12-year-old Kira from Mariupol: Russians killed her father and abducted the wounded girl to the territory not controlled by Ukraine | Охматдит (ohmatdyt.com.ua)

So, I wrote this poem as a story of Kira, her father Eugene (former captain of the Ukrainian national water polo team Yevhen Obedinsky), his girlfriend Anna, and her grandfather.
You’ll see who her and her grandfather’s ‘Gandalf the Green’ was, and also is, in their photos.
(I also read “Why are Ukrainians calling Russians ‘orcs’?” by James FitzGerald on 30 April 2022, on the BBC news.)